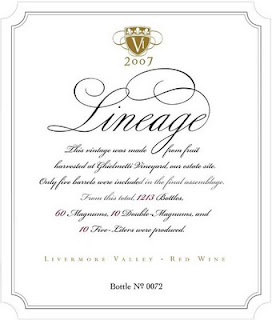 The Steven Kent Winery's debut release of Lineage - its ultimate Bordeaux - style red, continues to wow the critics. This time, the accolades are coming from Connoisseurs' Guide to California Wine, one of the most reputable industry and consumer sources. In its August issue, CG gave the 2007 Lineage a whopping 95 Points and three coveted "Puffs." It called Lineage "deep and wonderfully expressive," saying "it ranks as the single best Livermore Valley wine in memory."

These comments echo earlier raves from two other respected publications, Wine Spectator Magazine and Wine Enthusiast Magazine. W.E. tabbed Lineage at an "Exceptional" 94 Points. And Spectator gave it an "Outstanding" 91 Points, calling Lineage "one of the best wines ever from Livermore Valley."

These impressive scores help to further cement Steven Kent Winery's reputation as one of California's "rising stars" for collectable Cabernet and "Bordeaux" varietals. Steven Kent Mirassou is especially proud of this inaugural Lineage effort:  "our goal from Day One has been to showcase what the Livermore Valley region is capable of - Lineage is both a testament to the area's history and a strong statement of the future potential for world-class wines here."

The 2007 Lineage artfully combines Cabernet Sauvignon, Cabernet Franc, Petit Verdot, Malbec, and Merlot from the Ghielmetti Vineyard and the winery's own estate blocks. Only 110 cases were produced; it retails for $125 a bottle. The 2007 release is fully subscribed at the winery but is available at select fine dining establishments. Collectors interested in the upcoming 2008 Lineage should immediately contact the winery, as only a few subscriber opportunities remain.