The Wine Seeker's Guide to Livermore Valley by Thomas Wilmer 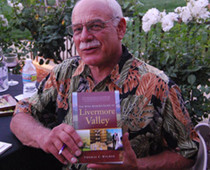 Thomas Wilmer has traveled around the world providing arm-chair travels with his insight on numerous destinations.  He has now given us all an insight to one of the most historic and interesting wine regions right in our own backyard in his book, “The Wine Seeker’s Guide to Livermore Valley”.

As a personal note, this writer often meets visitors here in Silicon Valley who are looking for something to do during the weekend and usually ask for directions to Napa.  I tell them that we have great wine regions here in the heart of the Bay Area, particularly Livermore Valley, where the wines are fantastic, the tasting rooms are friendly and not packed with groups of limousines and minimal, if any, tasting fees.  Usually the winemaker themselves are there in the tasting room to tell you about their wine and the history of their vineyard.

Mr. Wilmer does a great job of taking you into the heart of Livermore Valley, first providing you with a brief history of wine in the valley, where winemaking was a part of Livermore Valley life in the mid-1800s.  While Napa is proud of winning the judgment of Paris in 1976 (and the basis of the movie “Bottle Shock”),

Livermore Valley was winning awards at the Paris Exposition almost 100 years earlier in 1889!  Many of the earliest wineries in California were in Livermore and still exist today, including Wente and Concannon.  The Wente Chardonnay clone is the foundation for Chardonnay throughout California.

His book continues with an examination of 39 wineries in this region, telling the reader about the history of the winery, introducing them to the winemaker and examining their winemaking philosophy.  This is not a book reviewing each wine, but rather a travel guide to introduce you to the wineries of Livermore Valley and invite you to visit the individual wineries, meet the winemakers and sample their award winning wines on your own.

The writer continues with a tour of other activities for the wine lover to do in this wine region including review of wine shops, lodging, restaurants, events and other things to do in the region such as the Niles Canyon Railway wine tasting specials, the Livermore Valley Wine and Cycle Tours, Livermore Shakespeare Festival at Concannon Vineyards and more.  This is definitely a book for any wine lover in the bay area to keep handy and use as a source when visitors arrive or just to determine what to do on a sunny California weekend.

This book is available at most Livermore Valley tasting rooms or from RiverWood Books
Posted by wineproguy at 10:08 PM No comments: 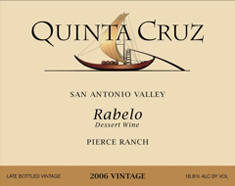 Quinta Cruz is a sister brand to Santa Cruz Mountain Vineyard that was created in 2008 to showcase wines using varietals that originated on the Iberian Peninsula (Spain and Portugal).  Owner/winemaker Jeff Emery developed a love for these varietals during his travels to that region.

Jeff particularly fell in love with the ports produced from grapes in the upper Duoro Valley of Portugal.  The unique varieties found here have long been found to produce a very special wine.  He set a goal to produce a port-style wine in California that rivals the fine Ports from Portugal.  Port houses in Portugal used to produce their own brandy for Port production in their old copper alembic stills.  But in the early 1970’s Portugal established new rules for Port production requiring producers to purchase the neutral spirits from the government.
At Quinta Cruz they went back to the old traditional Portuguese methods of producing Ports, including control over the brandy added to fermenting juice to stop the fermentation before the yeast has fully converted the sugars into alcohol.  This added brandy results in a drink that has a good amount of residual sugars, and high alcohol content.
Jeff Emery produces his Rabelo, late bottled vintage dessert wine following the traditional styles by first using truly Portuguese varietals, Tinta Roriz, Touriga Nacional and Tinto Cao, and second, he does not allow the grapes to become overly ripe and raisiny.  The grapes are picked while they can provide the fresh, bright, fruit characters.
Working with a local small distillery in the Santa Cruz Mountains where they have a beautiful copper alembic still that originally was used to produce Cognac.  Using Tinta Roriz grapes from Pierce Ranch in Santa Cruz Mountains, they are able to produce a complex brandy that adds to the complexity of the finished wine.  In fact, all of the grapes use in producing Rabelo comes from the same San Antonio Valley Pierce Ranch vineyard, making this a very unique wine.
The San Jose Wine Examiner tasting panel found the 2006 Rabelo offers a special complexity with ripe fruit flavors plus walnuts and molasses.  This is a wine that you can enjoy by itself after a meal, or with some nuts or strong cheese such as a blue cheese.  It is definitely not the same as the fruity, overripe port-like wines produced by many California winemakers.
Rabelo is the flat bottomed boat that originally carried the Port wine from the upper Duoro Valley to the aging houses along the river in the town of Oporto.
For more information:
Posted by wineproguy at 10:01 PM No comments: