Silver Oak is the epitome of what Cabernet Sauvignon can be.   And Silver Oak delivers two Cabernets, one from Alexander Valley in Sonoma County and the other from Napa Valley.  When Raymond Duncan first visited Napa Valley in the late 1960s he was enthralled by the native beauty of the region and with the potential of the young wine industry.  He began to purchase land in Alexander Valley and Napa Valley and hired renowned winemaker Justin Meyer to plant and manage the vineyards.  Justin agreed, providing that he can also create a winery that will raise the standard of Cabernet in the region.

This vision has carried on over the decades for Silver Oak Winery.  From the first vintage of Alexander Valley Cab to the expansion of the winery in Napa Valley, Silver Oak has focused on this vision of the potential of Cabernet Sauvignon in the region.  The developed two wineries to achieve this vision , in 1981 they developed the Napa Valley Estate on the site of the old dairy farm in Oakville and in 1992 they purchased the beautiful Tudor-style estate in Geyserville that is home to the Alexander Valley Cabernet.

Over time additional vineyards were acquired, but the focus on the two separate wineries continued.  As time passed, both the winemaker and the management changed, now with David Duncan serving as the winery president and Daniel Baron as winemaker, but the vision remains the same to produce the high quality cabs that are capable in the region.  It is a symbol of the tradition of excellence and continuous improvement that was established by the founders many years ago.

The 2007 Alexander Valley Cabernet Sauvignon is a great fruit driven wine.  Starting with the bright ruby color, you will lead on to the aromatic black plum, blackberry and spice aromas.  Tasting the wine, you will enjoy the same rich, full dark fruit flavors with a full body and roundness to the wine, reminiscent of a cherry cobbler.  The finish continues on forever, ramping up from a simple fruit forward quality to a complex rich high-end wine with a complexity of flavors.

The 2006 Napa Valley Cabernet Sauvignon is produced with 81% Cabernet Sauvignon plus 11% Merlot, 5% Cabernet Franc and 3% Petite Verdot.  These added varietals certainly add to the complexity of the wine that develops in the glass.  This is a wine that you feel as much as you taste.  The variety of dark fruit flavors and interesting spices build up in your mouth and continue on to a long finish.  The wine is so balanced that you might have a hard time determining the specific dark fruits that include plum, raspberry, blackberry and cherry. But you will certainly know that you have experienced a wonderful wine tasting experience.  This wine will continue to grow and perform for at least 15 years.

This is the wine to impress your friends around that special meal.  You will savor the flavors that are brought out when paired with a great meal.

Posted by wineproguy at 9:13 PM No comments: 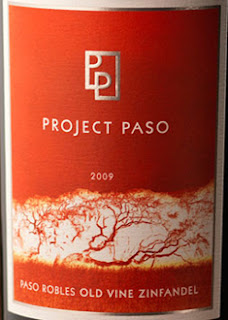 Project Paso is the newest wine brand from one of the oldest winemaking families in California, Don Sabastiani and Sons.  Don Sabastiani is a fourth generation California vintner with history back to 1895 when Samuele Sabastiani immigrated to Sonoma from Italy, opening his first winery in 1904.
Thirty years ago August Sabastiani worked with Paso Robles vintner Sam Balakian, using his grapes to add depth and complexity to their California appellation wine.  The new brand, “Project Paso”, pays homage to that three decade partnership.  “We are excited to launch Project Paso because we’ve wanted to showcase our long term relationship with Sam Balakian, a local Paso Robles winemaker, for quite a while, Paso Robles is also the hottest appellation in California right now,” said Donny Sabastiani, President of Don Sabastiani & Sons.  “Project Paso is an aromatic and savory wine, at a reasonable price that has already shown strong appeal among consumers.”
Paso Robles red soils and coastal climate gives the wines an earthy complexity and elegant freshness.  For whites you will detect minerality with fresh character.  Red wines have bold flavors and moderate tannins.
The Project Paso 2009 Chardonnay delivers aromas and flavors of green apple, Meyer lemon and apricot with a touch of vanilla.  The sur lie aging has given this wine a great full body and richness to it and combined with the acidity and fruit results in a nice wine for only $10.
The 2009 Red Wine Blend is produced with a variety of grapes including 37% Grenache, 16% Zinfandel, 14% Petite Sirah, 11% Mourvedre, 9% Barbera, 8% Lagrein, 3% Tempranillo and 2% Sangiovese from Paso Robles.  All these grapes add a variety of aromas and flavors to the wine.  From the Grenache you will enjoy the jammy red cherry flavors, from the Zinfandel, the spicy pepper comes into play, and the dark fruit from the Petite Sirah and Mourvedre, along with a certain earthiness, gives it some complexity.   This is a very interesting wine for around $11.  It recently was awarded a silver medal at the 2011 California State Fair.

Project Paso 2009 Cabernet Sauvignon demonstrates what is Paso is all about, with bright blackberry, blueberry, leather, earth and mushroom flavors.  As you taste this wine you will enjoy the dark fruits of black cherry, plum, a touch of chocolate and even a cinnamon toast quality.  It has a nice finish of cherry and cedar.  This wine has a lot going for it for only around $11.  This wine also won a Silver Medal at the 2011 California State Fair.


The 2009 Old Vine Zinfandel is a blend from three different vineyards in Paso Robles.  The nose is rather intense with dark fruit, pepper and wildness.  As you drink the wine you will savor these same dark fruit flavors and a certain amount of chocolate and cherry. It also has a nice finish and a price of only $10.

One thing you will notice about all the Project Paso wines is the Zork.  Now what is a Zork?  If is a closure that is more convenient than a cork but classier than a screw cap.  It is easy to open yet protects the wine, delivering the aroma and tastes that the winemaker intended.  It even has a bit of the romance of cork and can be reused to seal the bottle for the next day.


For more information:
Posted by wineproguy at 9:10 PM 1 comment: