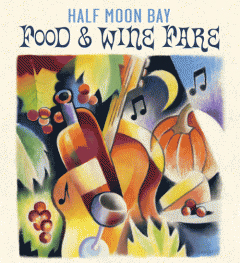 Get away to Half Moon Bay, known for beautiful views, great food and fabulous wine. Live the good life by attending the Half Moon Bay Food & Wine Fare, Saturday, November 5, 2011 from noon to 4:00 p.m. at Oceano Hotel & Spa, Harbor Village Shops. Admission is free and the Santa Cruz Mountains wineries will be offering wine by the taste and bottle.  Wine glass tickets are $5 and wine tickets are $1 each at the Santa Cruz Mountains Winegrowers Association web site. A taste will be between 2-5 tickets. The event will feature wines from over 20 Santa Cruz Mountains Wineries and local Half Moon Bay restaurants will be cooking up some delicious food for sale from local restaurants.

As a special addition to this event, they will be pouring the Gold Medal Wines from the 2010 Santa Cruz Mountains Commercial Wine Competition.  This is your chance to taste the best of the best!

A portion of the proceeds for this event will go to Coastside Children’s Programs (www.coastsidechildren.org).  The Coastside Children’s Program is a child care and development center that provides quality educational activities through preschool and before/after school programs.  There will be a children’s area set up at the Half Moon Bay Food & Wine Fare with games and fun so bring your children along!

Posted by wineproguy at 9:54 PM No comments: 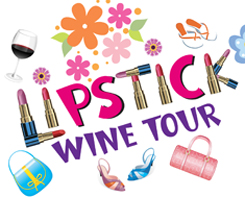 Six wineries in Livermore Valley are hosting a special Ladies Day Out in Wine Country on Saturday, November 5.  Ladies, grab your girlfriends and a designated driver and come enjoy a fun day of wine tasting in Livermore Wine Country. Be pampered at every stop with girlie treats, like chocolate, cake, spa treatments, hair styling, jewelry, fashion accessories, makeup and lots more, including special wine discounts.

The first 75 ladies to visit Rodrigue Molyneaux receive roses from Fantasia Blooms and chocolate covered strawberries from Chef Tracy Flores at Castlewood, to go with a special flight of sweet wines. Relax with a by-the-minute foot, back or neck massage by Cheri, just $1/minute! Les Chenes has sassy edible works of art to taste and purchase– how about a cake purse? - from Sugar Mama Bakery, plus hair styling tips from a high end San Francisco salon. McGrail will feature Holiday Smoky Eye demos by makeup professional Sheri Balken, plus scarves and purses by CC Kelly.  Nottingham Cellars offers delicious confections from Danville Chocolates and Stella and Dot Jewelry. Occasio Winery will be serving mini cupcakes from Dolce bakery, and featuring one-of-a-kind handcrafted jewelry by Holly Ellsworth Rose.
Don’t miss the “Kissing Booth” at Retzlaff, where you can have your official “Wine Babes” lipstick kiss tattoo tastefully applied by a handsome hunk! Learn how to shape brows with Nadine of La Di Da Beauty Lounge. Browse creative designs from Lynda Yonemoto of Silpada Jewelry. Indulge in Chocolate Mousse and fresh berries with Port!

See mcgrailvineyards.com for a map and details

Posted by wineproguy at 9:52 PM No comments: 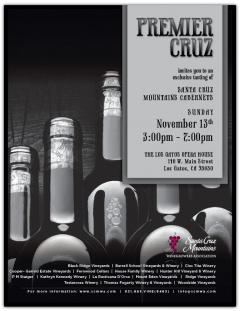 Premier Cruz is the first exclusively Cabernet Sauvignon tasting of the Santa Cruz Mountains Wines.  It takes place in the historic Opera House in downtown Los Gatos on November 13 from 5 – 8 p.m.  The tickets are only $75 for a great selection of fine Cabs.  Guests will have an opportunity to sample some of the finest examples from this cool climate appellation.  Several rare older vintages will be offered and paired with food purveyors including Just Catering, The Picnic Guild and Fiscalini Cheese Company.
This year’s tasting will include library wines from many of our distinguished wineries.  Two of the featured wines will be a 1978 from Ridge Vineyards and a 1984 from Mount Eden Vineyards.
Santa Cruz Mountains are world famous for their Cabernet Sauvignon.  These lush mountains appear to have the perfect combination of altitude, soil and climate to produce rich, ripe Cabs without overpowering tannins.  The soft, balanced wines deliver an abundance of floral and fruit, yet still have the structure to pair nicely with foods and long savory finishes.


Cabernet Sauvignon first gained importance in Bordeaux in the early 19th century and reached California some sixty years later. The earliest plantings of Cabernet in the Santa Cruz Mountains appear in the late 1870's when William Pfeffer developed his vineyard in the foothills above Cupertino.   Pierre Klein purchased 160 acres on Monte Bello Ridge naming his winery Mira Valle.  This property, called Jimsomare today, is part of the famous Ridge Monte Bello Vineyard. By 1889 there were over 100 planted acres of Bordeaux varieties in the Santa Cruz Mountains.  Today, there are approximately 250 acres.
Recognition in the past included medals for Pierre Kleins' cabernets from the Paris and Brussels Expositions of 1889, and 1900 and praise from Frank Schoonmacher in the 1940's for Chaffee Hall at Felton and Martin Ray's cabernets made by the Rixford family at La Questa.  And, of course, at the famous Judgment of Paris Tasting in 1976, Ridge Vineyards 1971 Monte Bello Cabernet Sauvignon went up against some of the best Cabs from Bordeaux Premier Cru vineyards in France and showed what California Cabs can do.  Most recently the results of a 30 year repeat of the Paris Tasting focused international attention on the Santa Cruz Mountains cabernet.
Participating Wineries in the 2011 Premier Cruz include:
For more information: Santa Cruz Mountains Winegrowers
Posted by wineproguy at 9:50 PM No comments: 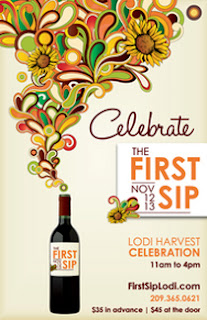 Lodi Wine Country invites you to their annual First Sip celebration on November 12-13; 11:00 a.m. to 4:00 p.m.  This is your chance to be one of the first to sample the first wines of the 2011 vintage as well as other fine vintages.

Visitors can meet the local winemakers, tour the vineyards and take in the rural atmosphere of this wine region close to the San Francisco Bay Area. The winemakers have just finished bringing in the 2011 harvest and are anxious to share with the visitors. Many of the wineries are offering special activities including food and wine pairing, live music, blending seminars and tours of the vineyards.  Tickets are only $35 in advance or $45 the day of the event.  Tickets are good for both days of the event.

Over 40 wineries around Lodi area are participating in First Sip.  You can check out what each winery is doing at the First Sip website or click on the winery name below for more information.
For more information about Lodi Wine Country First Sip

For Halloween - try a taste of Poizin - the wine to die for!

Poizin from Armida Winery in Dry Creek Valley is the wine to die for!  This deep dark Zinfandel is a delicious wine with ripe ruby cherries, plums and a hint of herbs.  Poizin has a velvety texture that envelopes your mouth with a richness you can expect from a fine Dry Creek Valley Zin.  The 2009 Poizin has 88% Zinfandel and 12% Petite Sirah.  Each bottle has a skull and crossbones symbol on the face in a blood red color and is the perfect wine for your Halloween meal with friends.  The price is only $25.
The Reserve Poizin is the best of the best.  Using the best and most delicious nine barrels of Zinfandel in their cellar, this wine delivers a great mixture of plum, Bing cherry, peppercorn and cranberry.  You will admire the smoky aroma and the blend of mocha and blackberries with a bit of meatiness on the finish.  The Reserve Poizin the bottle is hand-etched and painted with the blood red color.  The bottle is dipped in a blood red wax and the color drips down the neck like dripping blood.  Finally the exquisite bottle is sealed in its own wooden coffin.   This beautiful, yet eerie package sells for $80.

For the white wine lovers, you should enjoy the Antidote in its 375 ml blue bottle.  This dry Russian River Valley Pinot Grigio is fermented on extended lees to create a beautifully complex wine with a crisp, bright nose of cantaloupe and peach.  The price is $19. 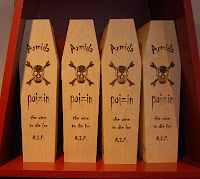 Armida Winery was founded by brothers Steve and Bruce Cousins in 1994 and they have progressively turned this Dry Creek Valley winery into a producer of artisan, single vineyard wines using grapes from the best winegrowers in Sonoma County.  Their winemaker is Brandon Lapides who joined Armida Winery last year.  They produce a great selection of Zinfandel, Chardonnay and Pinot Noir but their most famous wine is the Poizin and its companion, “Antidote”, a Pinot Grigio.
For more information:
Armida Winery
Posted by wineproguy at 9:42 PM No comments: