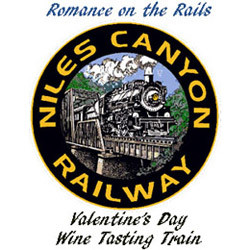 Niles Canyon Railway can make your Valentine’s Day unforgettable with the annual Romance on the Rails Wine Tasting Trains. On Sunday, February 10, there will be two trains, one leaving the Sunol station at 12:00 noon and another leaving at 3:00 p.m.

You will experience the magic of a bygone era as you travel for two hours through scenic Niles Canyon on a vintage train in the new Southern Pacific parlor-lounge car #2979, newly restored to its elegant 1940s appearance. It is the winner of an Art Deco Society of California preservation award. It features plush lounge seating and a semi-circular mahogany bar framed by etched glass and mirrors.

The car is climate-controlled for your comfort, and attendants will be on board to assist in any way you require during your trip. An open-air car is also included for your viewing enjoyment.
Fine premium wines from Livermore Valley wineries have been hand-selected by Wine Educator Steve Ferree. The wineries represented on the Romance on the Rails are::
Steve, the WineProGuy, will be on board to provide you with information about the wines and the cheeses that are being paired. In addition Hors d’oeuvre will be served.
The Romance on the Rails Wine Tasting Train is sponsored by the Pacific Locomotive Association and the Golden Gate Railroad Museum and proceeds of the event support their railroad historic preservation programs. All seats are reserved and tickets are $75 and are available at their ticketing site.

Posted by wineproguy at 9:02 PM No comments:

The Zinfandel Advocates & Producers (ZAP) is hosting the annual Zinfandel Festival a California legend, in San Francisco, January 31 – February 2. This is a grand festival in celebration of America’s Heritage Wine, Zinfandel. It is held again at the historic Concourse Exhibition Center, South of Market. This former railway station harkens back to a classic age of travel and provides plenty of space that is handsomely finished and comfortable. And there is plenty of parking and handy to public transportation! There will be four events during those three days plus celebrity chef, winemaker dinners and plenty of fine Zins to sample.

Thursday, January 31, Epicuria Food & Zin Pairings – This gourmet adventure occurs from 6 – 9 p.m. in The Concourse. Your palate will love the discovery of the diversity of Zinfandel and its wide range of complementary flavor combinations. Mingle with winemakers and epicurean experts as you take a journey for your senses sampling the regional offerings. This event features 50 top Zinfandel wines and creations from master chefs. The Zin Kitchen will also host cooking demonstrations and talk about Zin and food pairing. Tickets are $95 for ZAP members and $125 for non-members.

Friday, February 1, Flights – This Forums of Flavor from 10:30 a.m. to 1:00 p.m. at The Fairmont Hotel on Nob Hill in San Francisco is your chance to experience discussions as diverse as the wine itself. Here you experience exclusive seminar-style tastings where you will discover themed flights of Zins and interact with Zinfandel experts. Tickets are $60 for ZAP members and $75 for non-members.

Friday, February 1, Winemakers Dinner – The fabulous forties come alive at this Casablanca-themed VIP benefit at the Fairmont Hotel atop Nob Hill from 5:00 to 10:00 p.m. Journey back in time as you learn about the origins of Zinfandel and the modern day practices that makes it so legendary. Come to this glamorous reception and dinner and enjoy private selections poured by premier winemaker hosts. The live and silent auctions feature rare and one-of-a-kind lots with proceeds benefitting ZAP programming, education and Heritage projects.

Saturday, February 2, Grand Tasting – The main event is the Grand Tasting from 2:00 to 5:00 p.m. for the public at The Concourse through a journey of the world’s largest single varietal tasting as you sample from hundreds of barrel samples, new releases and premier Zinfandels. Meet the winemakers and learn more about America’s Heritage Wine. Tickets are $49 for ZAP members or $59 for non-members.

This is a major wine event in the Bay Area and a great opportunity to learn more about California's heritage wine, Zinfandel. The Concourse is at 635 8th Street at Brannan in San Francisco.
For more information:

Posted by wineproguy at 8:58 PM No comments:

Five Temecula Valley wineries picked up 26 awards at the 2013 San Francisco Chronicle Wine Competition, including a Best of Class for the Monte de Oro 2008 Synergy 65 Red Blend. Temecula Valley winemakers took home 4 Gold, 4 Silver and 12 Bronze awards. Congratulations to those award-winning winemakers in this Southern California wine region.
The 2013 San Francisco Chronicle Wine Competition is the largest competition of American wines and this year included a record breaking 5,500 entries from 25 states and judged by 60 prominent wine judges. The competition is always fierce and as the number of entries grow, it becomes tougher.
Following are awards picked up by Temecula Valley Wineries.

The public is invited to the Public Tasting to be held at Fort Mason Center in San Francisco on Saturday, February 16th at 2 – 5 p.m.
For more information: 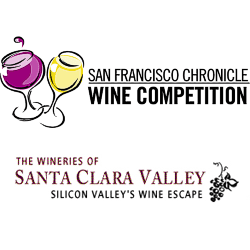 Santa Clara Valley is a wine appellation with a long history of wine making and was one of the first premium wine production regions in California. But during the last few decades the “Valley of the Heart’s Delight” has achieved a premium reputation in the non-wine industries and only recently have wine lovers seen this region achieve resurgence in winemaking. Many small boutique wineries have sprung up over the last 10-20 years concentrating on small handcrafted wines that reflect the terroir of this region.

The 2012 San Francisco Chronicle Wine Competition is the largest competition of American wines and this year included a record breaking 5,600 entries from 1,379 wineries from more than 25 states, judged by 60 prominent wine judges. The competition is always fierce and as the number of entries grow, it becomes tougher.

Other award winners for Santa Clara Valley wineries are:
The public is invited to the Public Tasting to be held at Fort Mason Center in San Francisco on Saturday, February 16th at 2 – 5 p.m.
For more information:

Posted by wineproguy at 8:51 PM No comments: