The Tri-Valley Conservancy announced the winners of this year's Uncorked Wine Competition on March 13, 2013.

The Livermore Valley has long been a premier wine region since the mid-1800s. Vintners recognized the region’s climate and terroir as suitable for grape growing. In fact a Livermore Valley wine was the winner in of America’s first Gold Medal for Wine in the 1889 Paris Exposition. To honor this great winemaking and grape growing heritage, the Tri-Valley Conservancy has sponsored “Livermore Valley Uncorked”, an annual wine competition that is open only to wines made from grapes grown in the Livermore Valley.

This writer was honored to be one of the judges in this year’s competition along with other local wine writers, sommeliers, wine makers, wine educators and restauranteurs. It was exciting day working with the other judges as we tasted 126 Livermore Valley wines from 36 different wineries. Each winery was allowed to submit up to 5 wines to be judged in twelve categories. The winners in the 2013 competition are:

The top winners are:
The individual category winners were:

About the Tri-Valley Conservancy
In 1900 the valley was home to over 5,000 acres of vineyards and over 50 wineries. Prohibition hit the Livermore Valley wine industry drastically as the vineyards dwindled to only 1,500 acres and only six wineries. As the Bay Area was growing in the end of the 20th century and the California wine industry was expanding, many in Livermore were afraid that the valuable agricultural heritage would be lost by the expansive growth of housing. A group of people and politicians in the Tri-Valley area gathered together to develop the South Livermore Valley Area Plan to provide strong economic incentives and equitable development regulations to promote investment in viticulture and ensure that development limits be placed on agricultural lands.

Following adoption of the Plan in 1994 the South Livermore Valley Agricultural Trust (now the Tri-Valley Conservancy) to protect and steward the land within the plan. The Tri-Valley Conservancy has a mission to permanently protect the fertile soils, rangelands, open space and biological resources, and to support a viable agricultural economy in the Tri Valley area. This mission involves both acquisitions to working with willing landowners to preserve their land in the tri-valley area and through stewardship to consult with property owners about their easement.
For more information:

Posted by wineproguy at 5:47 AM No comments:

The newest winery in Livermore Valley is the fabulous Rubino Estates Winery at 1188 Vineyard Avenue in Pleasanton. The Grand Opening event took place on Friday evening, March 1, welcoming wine lovers from around the area.

Rubino, Italian for Ruby, is the new label from the nearby Ruby Hill Winery, and features wines with an Italian heritage. Ruby Hill and Rubino winemaker Chris Graves is proud of this new addition to the family. He states, “We wanted to offer something grand and spectacular for the Livermore Valley. We decided to embrace the Italian heritage from the Ruby Hill area and bring a slice of Italy to our part of the valley. Now we have two pleasant and different experiences to offer, as well as different wines, between our two sister wineries. Why go all the way to Napa when you have fun and extravagant tasting rooms and great quality wines that are well valued?”

As part of the Ruby Hill family, Rubino Estates is also a trip back to the foundation of Ruby Hill itself. It is located in the heart of the Ruby Hill vineyards. The building housing this massive tasting room is near the original location of Ruby Hill Winery when it was founded by John Crelin in 1887. The original structure was a landmark in this area for years before it met its demise on November 8, 1969 in a suspicious fire. The massive stone walls remained standing for another 12 years before it was demolished. The new building in much the same stone style was built near that location. Mitchell Katz Winery was in this location for several years. 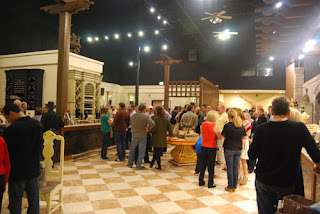 Rubino Estates is indicative of the new level of style that is coming to the Livermore Valley tasting rooms. Along with the Ruby Hill tasting room, Rubino Estates has joined the ranks as a wine tasting destination, with ample space, large tasting bar, deli and more.
Driving up the palm lined drive to the stone winery, you will first arrive at a beautiful large fountain where you turn towards the large parking lot along the side of the building. This massive stone building soars several stories high with the cupolas along the roof. Head towards the center entrance of the winery outlined with the Italian flags symbolizing the origin of many of these wines. Entering the tasting room you will admire the size of this space and feel that you were just taken to Tuscany with tiled floors, antique displays, and wood pillars. Survey the room, and you will see that, while it is a huge space the décor makes it more intimate with a deli to the right, antique displays to the left and the spacious tasting bar in the center.
Walk up to the bar and partake of one of their two tasting flights, the Harvest Flight or the Reserva Flight. Depending upon the flight you choose you will be sampling up to eight new Rubino Estates wines, ranging from a Brut Sparkling to a Barbera Dessert Wine with Moscato, Chardonnay, Cabernet blend and their new exciting Salute Red Wine from Livermore Valley. Then take your glass and stroll around the room, maybe take a seat by the large warm fireplace, or check out the fine gifts, or pick up a sandwich or pasta at the Deli. For a special time, arrange for a special Reserve tastings at the Kings Table.
You are encouraged to make a visit soon to this new tasting room in nearby Livermore Valley. You will enjoy this new Livermore Valley destination while discovering the great Italian style wines.

For more information: Rubino Estates Winery (Note that the full website will be opening shortly)

Posted by wineproguy at 5:41 AM No comments: